This article first appeared in Science.

To be valid, biodiversity offsets must support conservation that would not otherwise be implemented, not conservation already planned or under way. This is the principle of “additionality”: Only added conservation can counterbalance development (3). In violation of this widely accepted principle, the Indian government has sought to divert offset funds toward established conservation commitments. As a result, development remains uncompensated, and India suffers a net loss of biodiversity (4).

Biodiversity offsetting was codified in India’s Forest Conservation Act (FCA), 1980, which requires projects that cause deforestation to pay for compensatory afforestation (5). Successive government administrations, however, have failed to implement this offsetting mechanism, leaving more than INR 38,000 crores (about USD 5.7 billion) sitting unused in a government account, even as deforestation continues. A proposed new law, the Compensatory Afforestation Fund (CAF) Bill, 2015, which is up for debate in the Indian parliament, seeks to resolve this inertia (6).

India’s FCA, 1980, is explicit about the concept of additionality: “The compensatory afforestation should clearly be an additional plantation activity and not a diversion of part of the annual plantation programme” (5). The CAF Bill, 2015, proposes diverting compensatory afforestation funds to implement the Green India Mission (GIM), a separate afforestation program stipulated under India’s National Action Plan on Climate Change to fulfill its international climate change mitigation commitments (6). This falls under the category of established conservation, and therefore does not qualify as compensation according to the principle of additionality.

Biodiversity offsets refer to the gamut of conservation actions (ranging from ‘averted loss’ activities such as strengthening or expanding protected areas and establishing corridors and buffer zones to more active ‘restoration’ interventions including reintroduction of species, removal of invasives and improved land management practices) that are undertaken to compensate for the adverse impacts on biodiversity of high-footprint development and industrial activities including mining, oil&gas extraction, construction of large-scale (ports, dams, power plants refineries, oil rigs) and linear (roads, railways, powerlines and pipelines) infrastructure. Biodiversity Offsets are a part of the mitigation hierarchy – the environmental management framework that allows the integration of biodiversity into the development project life-cycle.

Required by the law in some countries but mostly undertaken voluntarily by corporates, biodiversity offsets are the last-resort option for addressing unavoidable impacts, after reasonable efforts have been made to avert and mitigate the impact. The objective of the biodiversity offsetting is often to achieve no net loss (NNL) and sometimes even a net gain of biodiversity, measured often in terms of species richness, extent of habitat and flow of ecosystem services.

As per speciesbanking.com (a global information clearinghouse for biodiversity offsetting, compensation and offset banking), as many as 45 laws, policies and programs pertaining to biodiversity offsetting and compensation are active in countries worldwide and 20 more are under development. More than 86,000 hectares of land has been purportedly conserved or restored through offsetting and payments to the tune of USD 1.8 to 2.9 billion are being made annually.

Just as biodiversity offsetting has found its way into national and state-level legislation, it is also becoming an important pre-condition for international project finance as most major lenders such as the IFC and international private banks mandate the adherence to the mitigation hierarchy. Where it is not mandated by law or the lending institution, biodiversity offsetting is being adopted voluntarily by businesses as a means to enhance reputation and gain a social license to operate.

However, no other conservation principle has polarized the conservation community as has biodiversity offsets. The proponents claim that the offsets allow the internalization of the environmental externality of biodiversity impact into development decision-making, arguing that some development is inevitable and when implemented in accordance with best practice biodiversity offsets can lead to real conservation outcomes at the landscape scale and provide the much-needed private sector boost to cash-strapped conservation finance. The criticism is equally convincing and scathing – offsetting is being seen as a   ‘license to trash’ and an attempt at ‘commodification of nature’. As George Monbiot incisively puts it – “It makes nature as fungible as everything else. No place is valued as a place: it is broken down into a list of habitats and animals and plants, which could, in theory, be shifted somewhere else.”

Even if we were to dismiss the debate as a natural process, the actual examples of biodiversity offsets have met with limited success. Their on-the-ground implementation has been fraught with challenges. To cite a review of biodiversity case studies by Fern, ‘biodiversity offsets face a number of problems: 1) technical (not being able to effectively measure what is lost and gained), 2) governance (not enforcing the mitigation hierarchy or adequate standards and measurements, nor penalising failed projects) 3) socio-geographical perspective (the local and wider cultural value of nature) 4) financial (fundamental errors in the market logic of using ‘price’ to regulate destruction 5) Legal (evidence to show that biodiversity offsetting interferes in the interpretation of environmental and planning laws and due legal process).’

The regulatory compensatory mitigation regime in India continues to be a rudimentary one – in lieu of diversion of forest land the developer pays to the government the cost of afforestation of equivalent area of degraded land (Compensatory Afforestation or CAMPA). In addition the developer also pays an amount equivalent to the Net Present Value(NPV) of the forestland which is to be used for ‘natural assisted regeneration, forest management and protection, infrastructure development, wildlife protection and management, supply of wood and other forest produce saving devices and other allied activities.’ The fact that the even the recently-revised figure of NPV of a hectare of forestland ranges from a mere Rs 4.38 lakh to Rs 10.43 lakh (6900 USD to 16000 USD) is another discussion altogether. What’s more, Compensatory Afforestation Funds to the tune of Rs. 38,000 crore (and accured interest to the tune of Rs. 6000 crore) collected by the states from the user agencies are lying unutilized. The compensatory mitigation regulation in India and its implementation is still a long way from the international best practice in offsetting. At the same time, voluntary offsetting is all but non-existent. There is no denying that corporates do take up afforestation activities but is often more as a social responsibility activity than as a compensation for impacts.

With India being one of the fastest growing economies in the world and with conflict between development and environment escalating, the impact of development on biodiversity and its mitigation is set to gain increased prominence in environmental legislation. In fact, the term offsets has already crept in policy discussions. But India will have to be very cautious before adopting a policy on offsets. It will first have to assess whether the present Environmental Impact Assessment mechanism even begins to follow the mitigation hierarchy. Environmentalists have repeatedly slammed the EIA process in India as a mere sham. When the first two stages of avoidance and mitigation of impact are compromised, the very purpose of offsets gets defeated. 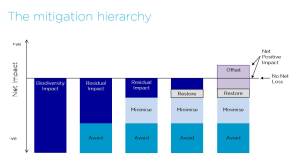 It’s important to remember biodiversity offsets come into play only in the case of unavoidable and residual impacts. Unless it has been determined without a shred of doubt that the impact cannot be avoided nor it can be mitigated through the environmental management plan, biodiversity offsetting will have no meaning. Lest we rush into offsets and it becomes another tool for justifying reckless development, we must tread carefully.